I will never forget the moment my father first came to visit me in El Salvador. A gruff old cranky Cuban, getting a smile out of him is sometimes a challenge. Now in old age, my plans to take him around the country, from Santa Tecla to Suchitoto, from Alegria to San Miguel, were not to be taken lightly. When we finally settled on the beach at Azul he was more than happy to be away from my crazy driving and moving from place to place… the sunrises and rum drinks were more his pace.

I made sure he came to visit during turtle season. We grew up with a membership to LA Zoo. I remember the smell of the wax mold Rhinoceros, tuna sandwiches with salty chips and dodging the staff well after closing time to hear the lions roar. He always watched Discovery Channel and had a subscription to National Geographic. He told us stories of the little pet chick he had in Cuba and how one night he squashed the poor thing by rolling over it in his sleep. How when he had us, he was always ultra paranoid of doing the same thing.

The trip having him here wasn’t easy for me… We are definitely not cut from the same cloth and I am not one of his favorites… so I can’t tell you what it meant to me when the old man came up to me one morning, shirtless with a very hairy chest (and back:), in slacks, a belt and flip-flops, tears welling in his eyes… and told me he was so glad he made me… that he knew his life meant something, because he had raised me and now I was saving the sea turtles.

Unless you have had the joy of experiencing it, you wouldn’t know how a little tiny turtle could turn a grumpy old man into mush… but there is something about watching these creatures that spring from the earth, following the light of the moon, battling the birds, the crabs and the ocean, to make there way to the place that they belong. They move without fear. Some a little more hesitant than others, putting their little arms out to slow the current as it rises and whisks them away. Others, charging straight down the beach and into the sea, swimming with all their might into the unknown… with a sense of purpose few humans hold.

If only we knew at the beginning what our purpose was. 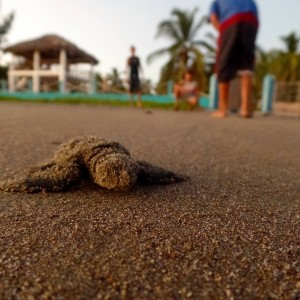 El salvador is home to 4 species of sea turtles… the Leatherback, Hawksbill (both critically endangered), Green (endangered) and Olive Ridley (vulnerable) species.  Sea turtle conservation benefits more than the turtles, it also provides hundreds of Salvadoran families with an opportunity to earn a sustainable living. During the egg laying season (June to November) the tortugueros are out on the beach every night waiting for female turtles, taking care not to disturb the nesting process or the mother will return to the ocean without laying her eggs. After she has finished, the tortugueros remove the eggs from the unprotected beach and bring them to the hatchery where they will be monitored 24 hours a day, 7 days a week until they hatch. The tortugueros also provide vital information and data regarding the nesting female and this data is used for population studies. For these services, the tortugueros are paid – enough money to feed their families on something other than sea turtle eggs and to keep them from selling eggs on the black market.

If you are interested in donating to our project or would like to come and experience the joy of releasing these little babies, please contact us at reservations@azulsurfclub.com