My mother, who worked incredibly hard fell in love. She married a man from El Salvador, and planned to travel to lugares exóticos and enjoy her life … Then they met Immigration Agency .

They were told the paperwork would go through faster if he left to El Salvador… He had lived in LA under political asylum since the war and had no record… She was a US Citizen from Cuba… They were so in love they would sit and watch television together and hold hands…So he left.

The paperwork took weeks, then months, then over a year. Mami cried and eventually, bought a house on an isolated beach in El Salvador. We made lemonade. 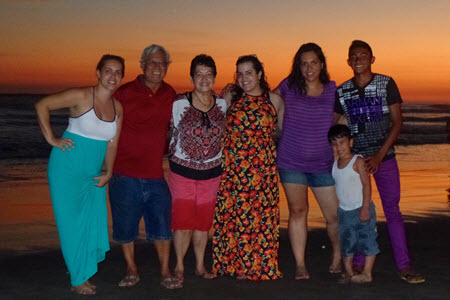 The whole family would come and hang out together in hammocks and read… there was no tv or wifi and the only cell phone signal was in one spot of the driveway (marked by my sisters and I in gold). We watched the sun set and the moon rise. We played in the sand. We ate watermelon and rode around in a beat up truck. We watched it pour and listened to the thunder. We did what we had to do… and made the best of it.

After several trips and getting to know the community, it was impossible to ignore the poverty. It didn’t have so much to do with the lack of shoes or ipads… it had to do with the lack of hope.
We eventually saw a group of surfers out in front surfing… and while we were from LA we know nothing of the sport. We saw what the fancy place was charging and decided to build a place to bring in funds to support the work we wanted to do in the community.

Since then, we have worked with several other non profits and many kind generous people, who have helped us build a school, a classroom, a bridge, a playground and we have fallen in love with El Cuco.

And we all hope to live happily ever after…